France indicated this week that it will follow the path of some other countries and introduce an end-of-waste status for recovered paper. This follows Italy and Spain, among others. However, companies that want end-of-waste status must meet certain requirements. Of course, if there is something to be fixed in the regulations, this always comes with more regulations. We know that by now. Federec, the federation of recovered paper merchants, supported the end-of-waste initiative - the paper mills united in Copacel did not. The latter do not want it, in line with the Cepi position: export of recovered paper should be banned altogether. Everyone is looking out for their own interests, but should we perhaps give some thought to completely removing the restrictions on the export of recovered paper? The EU seems to be looking into India's 'mistake' that needs to be corrected. The Netherlands tolerate the export, because a mistake was made, most other countries follow the export ban. Apart from the different interpretations in EU countries of how Annex VII should be filled in and also loading with and without end-of-waste status, there are also different views on export to India. Shipping from Dutch ports is allowed, but shipping recovered paper from other countries via Rotterdam is not. Unless the ban is circumvented by loading recovered paper from other EU countries into containers in the Netherlands. Then it is allowed again. It is an inexplicable soup, imposed on an important industrial sector that has to compete outside the EU with, among others, recovered paper companies in the US that laugh heartily at this idiocy in the EU. Perhaps we should start by abolishing the whole Annex VII and Green List Agreements for the EU. If we are serious about an EU without borders, why have borders for the transport of recovered paper? The European paper industry with many groups with mills in several countries would benefit from it as well as eventually they also pay (partly) for the red tape costs. And after 30 years of Basel, most countries that want to impose restrictions on the import of secondary raw materials have arranged it themselves.

As reported last week, the demand for cardboard (occ), especially from South-East Asia, continues to increase. Prices are also higher than locally in Europe, although export to some countries also comes with higher costs. But with this increasing demand, it is often the buyer who pays for that. For the time being, orders seem to be for volumes to replenish stocks, but the fact that purchases are being made during the period around Chinese New Year and also at higher prices indicates that there is a need. It remains to be seen how demand in China will look in February. Neighbouring countries rely on sales to China, but the situation there is anything but rosy. Announced price increases for pulp to China are being 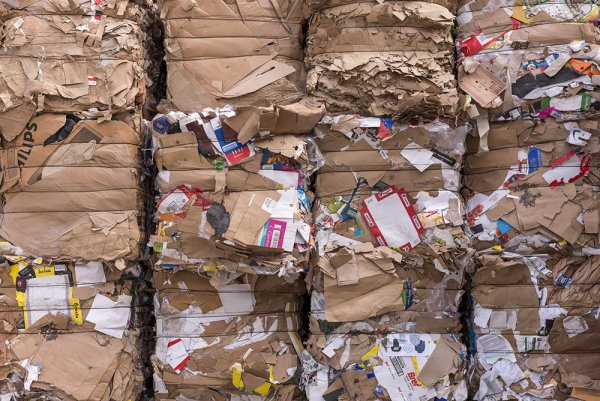 rejected because the pricing of finished paper and cardboard is lamentable. There is also little demand. The tissue industry, which often uses cellulose as a raw material, has announced major downtime. It is not much different with packaging paper. A revival in demand is needed, but perhaps the problem now is in the production capacity. All those new and rebuilding projects from paper machines to recycled corrugated board  - it will be too much at some point. In the US, there is also a softening in the market for test liner and medium. In the first three quarters of last year, production was still up by 2.6%, but in the last quarter it was down by 1.6% compared to Q4 2020. Stocks of finished products in the paper industry also increased sharply by 101,000 tonnes.

It is not yet really affecting the prices of recovered paper, not even in the U.S. In the last few months, prices for low and middle grades recovered paper have gone down, but a rebound in exports to Asia will keep prices up locally in both Europe and the U.S.

Price indication in Europe for low grades of recovered paper, sorted, baled and ex works are now between € 100 and € 160 per tonne. These prices are depending on quality, available volume, region and loaded weight.

Look here at the Price chart >>

The price chart gives an indication of the price of mixed paper, separately collected, in the Netherlands free delivered mill voer the last 10 years.
Scrolling over the top of the colums gives the exact price indication in Euro's per tonne.